About the gender binary 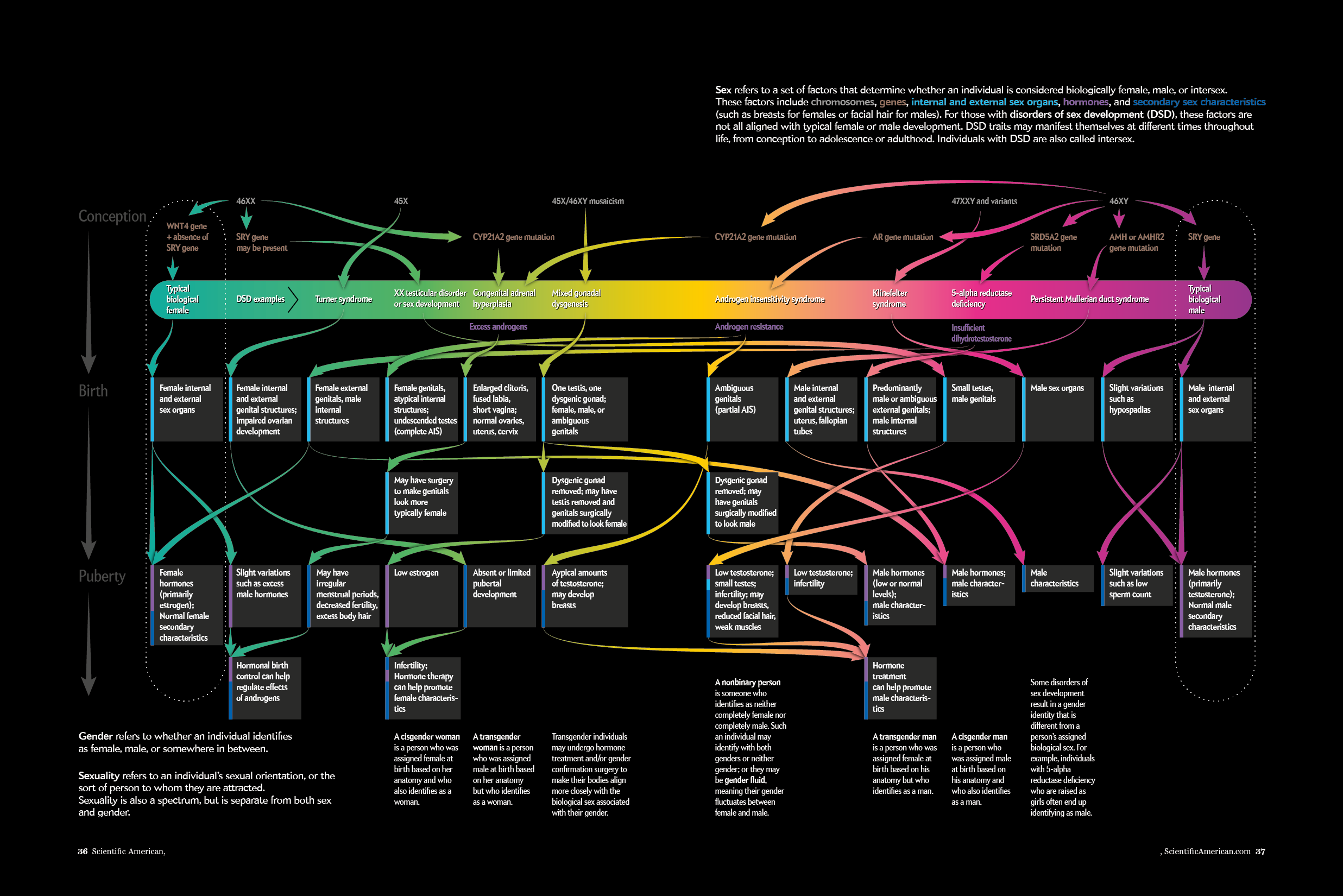 Administrator
Moderator
#2
The futility of trying to make sex binary
Transphobes often promote a binary view of sex/gender where you are stuck with the the sex you are born as, this of course doesn't hold up to scientific scrutiny. They cannot get their story straight on how people should be divided into 2 biological sexes, when you refute one thing they move on to the next.

For biological sex to be completely binary 100% of the human population must fit into two clear categories, otherwise the notion of a gender binary is a mere simplification for convenience.

Chromosomes
There isn't any clear way to divide humans into 2 sexes based on chromosomes, there are just too many intersex conditions making this proposed classification biologically false.

But there is a lot of people who cannot produce either so we cannot use this to get a clear binary division between the sexes.

Gonads
This of course isn't binary either, a lot of messy intersex conditions and it's unclear where the line should be drawn.

Then there is all the people who do not have gonads at all usually due to surgery.

I would like to change my mind, and the way to do that was to ask you to show where my beliefs are wrong, to debunk my beliefs. For years I believed sex is determined by all sex characteristics including secondary sex characteristics such as facial hair, breasts, etc and that sex is bimodal, a spectrum. These tweets posted by a scientist explain why they and other scientists believe sex is a bimodal distribution; https://twitter.com/ScienceVet2/status/1035246030500061184

And this article explains why sex is bimodal; https://whyevolutionistrue.com/2018/10/28/sex-in-humans-may-not-be-binary-but-its-surely-bimodal/
In order to change my mind, I need answers to the following questions.

Question number 1 , this is more so a question about other species, not humans, and why I'm asking GC is because whenever I ask about other species on science subreddits, I get answers from TRAs. So if any GC here is knowledgeable on the topic of biology and whether or not sex is binary in other sexually reproducing species I would appreciate if you answered this question, why is sex a binary and not bimodal in all sexually reproducing species?

In other sexually reproducing species, hermaphrodites that produce both sperm and egg show that the experience of sex is not binary, the options for an individual organisms sex are not limited to 'male' or 'female', and can be something else such as a hermaphrodite that is not male or female, and produces both egg and sperm. A binary system does not mean "two"; or "both" it means a system in which there are two options, an either/or situation.

Hermaphrodites introduce a scenario where the options are "either/or" and "both/neither", that means by definition sex is no longer a binary system in other species because there is a third option of expressing sex through producing both sperm and egg ... Why don't hermaphrodites show that in other sexually reproducing species sex is not a binary?

Question number 2
Why isn't someone less of a male or less of a female if they can not produce sperm or egg, have removed all genitalia in surgery, have big or small breasts, have less or more body and facial hair, etc?

Question number 3
Saying that sperm = man and egg = woman is a pretty wobbly position. If we were to make a similar argument about other classifications, it would be: Backbone (the feature) = mammal (the category). Except that isn't true. Any number of vertebrates could have backbones, and so the presence of a backbone does not indicate one is a mammal.
Now we can flip this to category/feature and say woman = egg or man = sperm. Except that also isn't true. Post-menopausal women do not produce eggs.

In one scenario, imagine a woman or man removes all genitalia in surgery, they have no genitalia left anymore, they can not produce sperm or egg, how come they are not less of their sex for losing those abilities and are not of a different sex category after the removal of all genitalia?
So then it seems "those that produce eggs are women" or "those that produce sperm are men" is incorrect, as one does not need to have/produce eggs to be a woman or have/produce sperm to be a man.
Why am I wrong in that? Can you explain to me where I'm wrong in my beliefs

Administrator
Moderator
#4
Having to pee with people of your same sex is disgusting
Why are people still fighting over same-sex spaces, you are not actually fighting over much of value.

It's way better to have single person toilets.

the same-sex washrooms and shit exist because of hetronormativity, like it reinforces the view that same sex peeps wont "normally" sexualize each other therefore its okay for them to see each other naked, but surprisingly gays exist and they arent even that rare enough to neglect.

One-person washrooms or any-gender washrooms should be the ideal alternative.

A more radical solution is to give up on privacy altogether and have everyone see you naked. There are already plenty of nudist beaches.

I do not think you should try to get accept to female spaces like shower rooms if you still pass as a male. It's actually very common for trans individuals to start of buymoding and delay social transition until they pass better as female.

One potential issue with downplaying the importance of biological characteristics such as ability to breastfeed is that then it will be more difficult to push for early medical transition, then society can easier get away with not allowing teens to transition "you can just identify as female, you do not need to transition".

It is a fact that the later you start your transition the more you will end up being different from the average cis female, hip bones fuse at age 25

Of course having strict requirements for womanhood would also exclude a lot of cis females, this is not a hypothetical problem, both men and woman (cis) are subjected to gender norms where deviating from that will cause social problems.

Implications for intersex people
Intersex people are also affected by these things, often they are surgically mutilated to fit into either gender category and sometimes it turns out the gender that were assigned to them didn't fit them particularly well. Them then being able to just identify as the sex they want to be will not solve the issue of them having been mutilated.

Detrans individuals
Another group affected by this are the ones that end up detransitioning. They may identity as they sex they were born as even though biologically tney are not there and they will never truly be there again, often gender transitions partly irreversible. While pointing this out may seem cruel it's important to recognize biological reality

i do not think it's appropriate to let these people just change bathrooms because they change their gender identity. detrans females are biologically different from cis females who never started transitioning (as groups).

There is also the truscum camp that think you are valid if you have "gender dysphoria" (unclear what exactly counts as that) but anyone can say they have dysphoria so it's not really safer from 'abuse'.

it is bad. the gender abolitionist, gender identity crowd are lesbians and radfems who are attempting to claw back from trans women the title of “most oppressed body.” they also reject being women out of internalized misogyny and to distance themselves from trans women. if gender is just an identity, than trans women are just males who identify as women, and everything reverts back to genitalia at birth. it’s genius, really

Administrator
Moderator
#6
Self-ID as a tool for gender egalitarianism
Self-ID can actually ve useful for circumventing discrimination based on legal sex.

If your state doesn't recognize same-sex marriage self-ID would allow you to go around that.

If there are gender quotas people disingenuously self-identifying as the other sex can allow the most qualified people to get positions instead of picking someone less qualified based on their sex.

In general self-id can be weaponized to push for gender egalitarianism by making legal sex near meaningless, abolishing discrimination based on legal sex isn't always politically viable. Personally i do not believe in egalitarianism and therefore i am sceptical of self-id.

Administrator
Moderator
#7
The doctor pointed out that a binary classification system is one which only have 2 possibilities, if there is a third possibility it's not binary even if said their possibility is never actually observed.

Administrator
Moderator
#8
Some people produce both sperm and eggs
Click to expand...
As far as i know this has not been observed meaning there are only 3 categories needed to categorize humans today (the 4:th category still technically exist though).

Edit: The individual who made the study sent the following which indicate production of both sperm and egg at the same time is possible

Administrator
Moderator
#9
Woman = Adult Human Female
There are many ways to arbitrarily divide humans into 2 sexes but what actually make sense is to look at the body itself.

When trans people medically transition with HRT the transition itself will be biological, all the hormones does is signaling to the body what to do, you already have the genes needed to grow fully functioning breasts capable of breastfeeding.

HRT will feminize the brain https://www.researchgate.net/public...e_and_estrogen_on_adult_human_brain_structure

I do not see much value in including male crossdressers in the "woman" category, being a women shouldn't be about conforming to gender stereotypes, it should be about the biological characteristics of your body.

There is already a term for people presenting as female without medical transition "drag queen".

If we promote the notion that you can be a women without transitioning then that can be easily used against trans people to deny them healthcare "they can just identity as female, no need to actually transition". This is why it's important that we recognize biological reality.

Of these both Reproductive sex and genitals can change. None of these are binary. Intersex people are not all "defective males" xor "defective females". Plenty of intersex conditions are just fine and does not require any medical interventions, we really need to be better at defending intersex rights.
You must log in or register to reply here.
Share: Facebook Twitter Google+ Reddit Pinterest Tumblr WhatsApp Email Link
Top